The Eurocup Eighthfinals, the first step on the now fully marked path to a title at season’s end, begins with the openers in all of its two-game series on Wednesday, February 24. The winners of each series will be the teams that have better aggregate scores after playing home and away games against the same opponent in successive weeks. The team that finished higher in the Last 32 plays the second game at home in each series

In an all-German clash, ALBA Berlin and FC Bayern Munich in meet for the first time ever outside of their domestic competitions, where they have faced each other for decades. Most recently, in their lone clash this season, ALBA won 90-74 in November led by Elmedin Kikanovic’s double-double of 16 points and 10 rebounds. Bayern won their German League semifinals series 3-2 last year and ousted ALBA 3-1 in the finals the year before that. ALBA has won its last four Eurocup home games and has 6-2 home record on the season as four of its scorers average double figures. Bayern has never been to Eurocup quarterfinals. It has a deep and versatile squad in which each of 10 players who appeared in more than one game averaged at least 6 points and five averaged more than 4 rebounds per night.

To open their series, the reigning two-time French champion Limoges CSP welcomes Herbalife Gran Canaria Las Palmas, which was tied for first in scoring with 88.5 points and ranked first in assists (21.5) during the Last 32. Last year’s runner-up, Gran Canaria is led by coaching great Aito Garcia Reneses. It was also first in two-point shooting (59.2%), and pulled down 11 offensive rebounds per night, compared to a league-low 6.7 by Limoges. in the Last 32. The hosts joined the Eurocup after playing in the Turkish Airlines Euroleague regular season and have a 3-1 record since Dusko Vujosevic was appointed as the new head coach. After a slow start, Limoges ended up ranked fifth in scoring (82.3) and tied for third in assists (19.2) last round. In its three Last 32 wins, Limoges has allowed 66.7 points per game, but in its three losses, opponents scored 89 points on average.

In Game 1 of their series, Strasbourg welcomes EWE Baskets Oldenburg to the floor where the French side already had big wins against Fenerbahce Istanbul and Real Madrid, among others, this season. Strasbourg is on a two-game losing skid, but in the Last 32 forced opponents into the second-most turnovers (18.2.), was tied for third in steals (8.8), and averaged 18.5 assists. Meanwhile, EWE Baskets is 4-2 in its last six games away from home. This is the first eighthfinals appearance for this German side, which won Group I while scoring 82.3 points per game, which ranked fifth in the Last 32. Oldenburg’s players have made 80.2% of their free throws this season and are one of only two eighthfinals teams that have been shooting from the foul line with above 80 percent accuracy.

Banvit Bandirma hosts EA7 Emporio Armani Milan in the first-ever official meeting between two teams. In the past 19 years, Milan has 1-14 record on Turkish soil, but arrives to its first Eurocup Eighthfinals matchup since 2004 with a balanced offense that has 11 players posting at least 5 points per game. Milan also ranked first in free throws made (19.1) and attempted (25) in the Last 32, and was the second-best three-point shooting team (41.3%). Banvit scored 81.2 points and landed an average of 10 three-pointers during the Last 32, making triples with fifth-best 39.2% accuracy. Adrien Moerman averaged 18.8 points and 9.3 rebounds in the Last 32, shooting triples 53.1%, and Dominique Johnson followed in scoring with 17.3, knocking down Last 32-best 23 triple on 54.8% shooting.

CAI Zaragoza hosts Dolomiti Energia Trento, which has reached the eighthfinals in its Eurocup debut campaign. Trento is averaging 84.1 points this season, but during the Last 32 that number dipped to 78.3. But Trento has made its defense work, ranking first in steals (10.3) and forcing the most turnovers (19) in the Last 32, but will look to improve on its 68.8% free throw shooting, which has been second-lowest in the competition this season. CAI is in its third season in the competition, but like Trento, faces its first time in the eighthfinals. CAI hopes to improve on its 7-1 home record this season, and it has been among best offensive rebounding teams in Eurocup (13.2), which ranks it second among the teams still in the competition.

In an all-Russian affair, Nizhny Novgorod plays at home against Zenit St. Petersburg. In their VTB League clash in mid-December, Zenit won at Nizhny 84-88 behind 23 points and 7 assists and 5 rebounds from Ryan Toolson. In terms of the Last 32, two teams have been statistically very even. Zenit did have four wins compared to Nizhny’s 3-3 record, but Nizhny scored 81.7 points while allowing 80.3 and Zenit scored 79.8 while allowing opponents to score 78.3 points. Nizhny’s offense produced 109 assists and Zenit’s was right behind with 108, and both teams were tied with 121 two-point shots made. Nizhny is 5-3 on home floor in Eurocup this season, and ranks among the top shooting 41.3% from three-point range at home, but goes against Zenit which scored 82.7 points on the road, and whose defense held opponents to a Last 32-low 27.1% on three-pointers attempted to allow only 5.8 threes per game, which was also lowest in the Last 32.

The Polish champ Stelmet Zielona Gora hosts former Eurocup champ Unics Kazan. The two sides play each other for the fourth consecutive season, and Unics hold 4-1 all-time record in head-to-head matches, including winning both games Zielona Gora hosted. Unics is the only undefeated team in the Last 32, and enters the series on an eight-game winning streak. The team averaged 87 points on the road, the best mark in the Last 32, led by that phase’s scoring leader Keith Langford (22 ppg.) and assists leader Quino Colom (7.8 apg.). Unics also led the Last 32 in defensive rebounds (27.3 drpg.), but now faces Zielona Gora which ranked second with 14 offensive rebounds per game, including a season-high 22 in its clinching road win against Umana Reyer Venice in Round 6.

In an all-Turkish clash, Pinar Karsiyaka Izmir hosts Galatasaray Istanbul for the second time this season. In their Turkish League matchup in late December, Karsiyaka won 97-92 behind 26 points from Josh Carter and 21 from Bracey Wright. The hosts are currently on a two-game Eurocup winning streak, after victories in a pair of must-win Last 32 games that they won by 33 and 43 points respectively. Karsiyaka finished with the second-best defense, allowing 71 points in the Last 32, and had third-best scoring offense (83 ppg.). But now they face Galatasaray which leads all eighthfinals teams in performance index rating (98.4 per game), ranks second in scoring (85 ppg.), free throw shooting percentage (80.9%) and blocks (3.06). Blake Schilb paced the team and led the Eurocup in three-point shooting percentage (56.5%), and Galatasaray also should get back its scoring leader Errick McCollum (19.3 ppg.).

Follow the start of the Eurocup Eighthfinals and all upcoming rounds on Eurosport or right here at Eurocupbasketball.com! 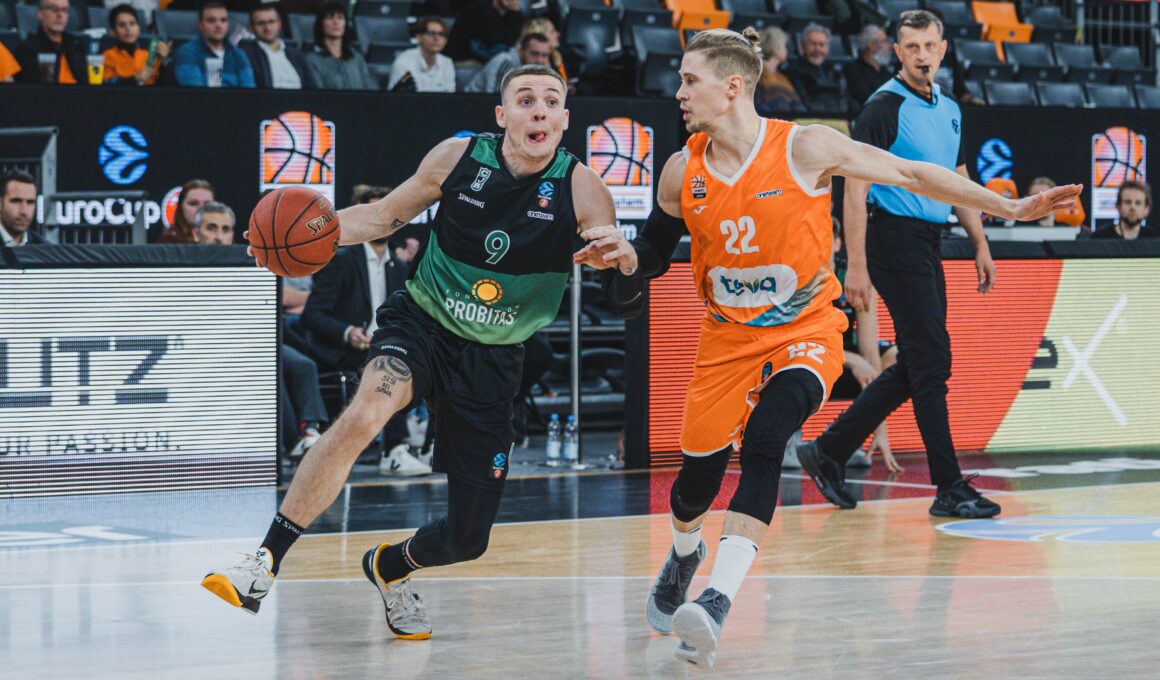 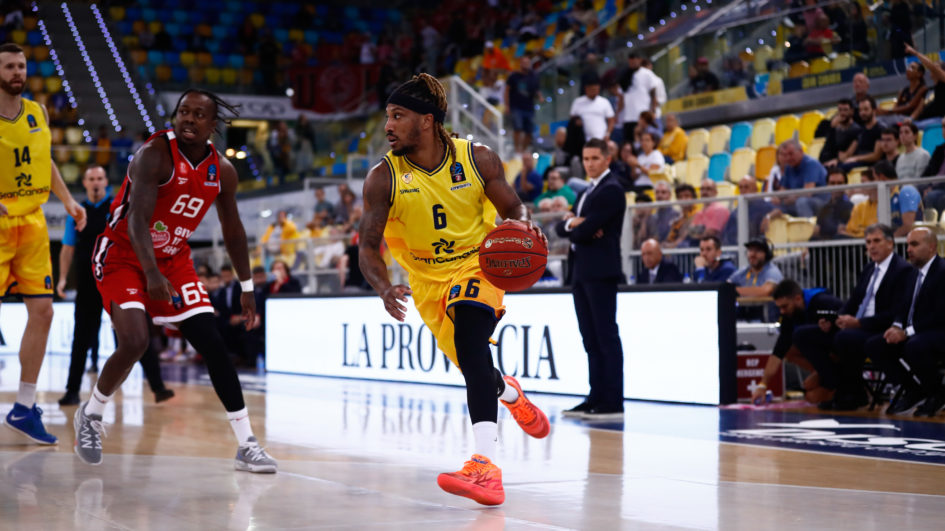