Round 9 of the Top 16 could put few teams on verge of the playoffs, and other teams on the brink of elimination. Action starts on Wednesday when powerhouses Real Madrid and CSKA Moscow collide in Madrid. There are four games on Thursday, and three more Friday

In Game of the Week on Thursday, Anadolul Efes Istanbul (3-5) plays at home against Lokomotiv Kuban Krasnodar (6-2). Efes has lost three in a row, while Lokomotiv has won its last three games. In each of those three wins it held opponents below 65 points, and has defense that holds opposing teams to 71.1 points and forces 15.2 turnovers – both best in the Top 16. First meeting of these two clubs in Round 2 was decided on the final possession, and Lokomotiv held on to 78-77 win. Offensively, Lokomotiv ranks first in the Top 16 in triples made (11.6), while Efes is third in that category for the season (9.6). This season, Efes is also second in three-point percentage (41.3%) and second in assists (20.1). This games also starts a final stretch of six Top 16 games for Efes, all of which it plays in Istanbul. Cedevita Zagreb (2-6) hosts Darussafaka Dogus Istanbul (2-6) in a game that both teams will try to use to get a win that will keep them in playoff contention. Cedevita has lost four in a row, and last three of those losses have come by 18, 20, and 23 points. In addition, Cedevita this season has 2-6 record on home floor, and in the Top 16 allows second-highest 84.5 points per night. But Cedevita beat Darussafaka in Round 2 in Istanbul 72-79, and hopes to sweep the series. Darussafaka is yet to win away from home in the Top 16, and leads this stage by committing 14.6 turnovers. Unicaja Malaga (2-6) looks to snap its five-game losing streak when Panathinaikos Athens (5-3) pays a visit. Two teams have been trending in opposite directions as Panathinaikos has won four straight. Only two teams allow less than 73.3 points that Panathinaikos allows in the Top 16, and Unicaja will want to improve on its league-low 69 points and 32.1% three-point shooting, but is unmatched on the offensive glass and pulls down 14.1 offensive rebounds per night. In a lone Friday game in this group, Fenerbahce Istanbul (7-1) looks to get back on the winning ways when it welcomes Crvena Zvezda Telekom Belgrade (5-3) to the Asian side of Istanbul. It’s the fourth meeting between two teams this season, and Fenerbahce won each one of the previous three with at least a 14-point margin. However, Zvezda enters the game as the winner of 5 of the last 6 games. Its perimeter defense holds opponents to 29.8% three-point shooting, but it will be put to the test against Fenerbahce which shoots three-pointers in the Top 16 with second-best 42.1% accuracy. Fenerbahce is also the best in two-point percentages (57.3%), tied second in rebounding (35.4) in the Top 16, and will hope to exploit that against Zvezda which allows more offensive rebounds (13.9) than any other team in the Top 16.

In Round 9 opener and a classic Euroleague showdown on Wednesday, Real Madrid (5-3) welcomes CSKA Moscow (6-2) to the Barclaycard Center in the Spanish capital. CSKA has been hot. Since beating Madrid 95-81 at home in Round 2, CSKA started a current run during which it won 6 of 7 games, including last four, and in each of those six victories it has scored 91 or more points. It’s no wonder CSKA tops Top 16 scoring with 91.6 average since it is third in assists in the Top 16 (19.5), shoots from long range with Top 16-best 43.8%, it is one of only two teams averaging double-digit triples (10.5), and it also has second-highest 57.2% for two-points. Madrid ranks third in scoring in the Top 16 with 84.5, it is ranked second in assist (20), and third in making 9.9 three-pointers per contest. On Thursday, in a pivotal game for both teams, Khimki Moscow Region (4-4) plays host to FC Barcelona Lassa (4-4). Two teams are tied in the fourth place, and Barcelona has won the first meeting between them 87-70. Khimki has lost three straight, but is 4-1 at home in the Top 16, and through eight games at this stage of the competition has second best scoring offense (85.4), ranks first in assists (20.6), and it is tied for second in rebounding (35.4). But Khimki’s defense also allows third-highest 84.4 points, and goes against Barcelona which ranks in top four with 40.3% three-point shooting, takes care of the ball better than any other team by committing only 11.1 turnovers, but has been 1-5 in last six road games. In the first of two games on Friday, last place Zalgiris Kaunas (1-7) hosts Brose Baskets Bamberg (3-5). Zalgiris has struggled on both ends of the floor in the Top 16 so far. It allows the most points (87.5), it has league-low number for assists (13.8), three-pointers made (5.6), it ranks last in two-point shooting (43.9%), and scores third-lowest 72.8 points per night. On the other hand, Bamberg makes third-best 41.2% threes, and allows league-low 7.3 offensive rebounds to its opponents. In the last game of the round, Olympiacos Piraeus faces a must-win situation when it hosts Laboral Kutxa Vitoria Gasteiz. It’s fourth meeting between two sides this season, with the Reds winning last two. It is also 15th time these two teams play in the past 5 years, and Olympiacos holds 10-5 edge. Laboral has not won in Piraeus since 2007, but arrives for this one as the winner of last five games and in a share of the first place in the group. Olympiacos has lost 5 of the last 6 Euroleague games, and now faces Laboral which dominates Top 16 in rebounding (40.4), and holds opponents to lowest three-point shooting average (28.8%) and second lowest points (71.5).

Eighthfinals Game 2: Only eight teams will be left standing! 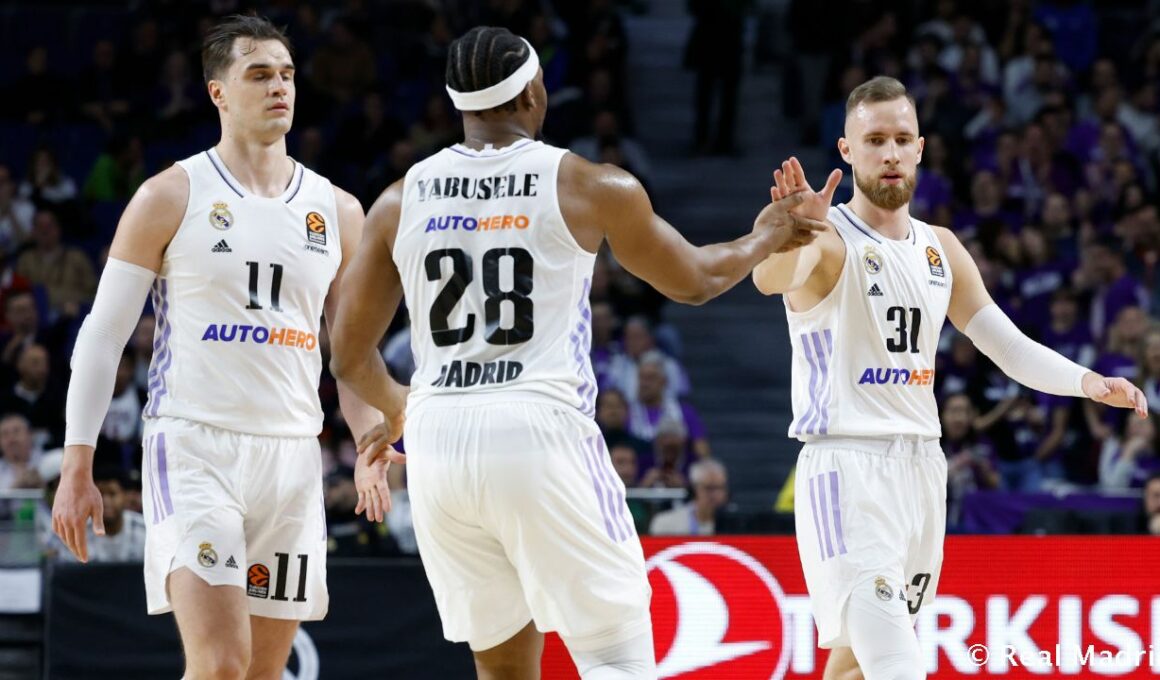 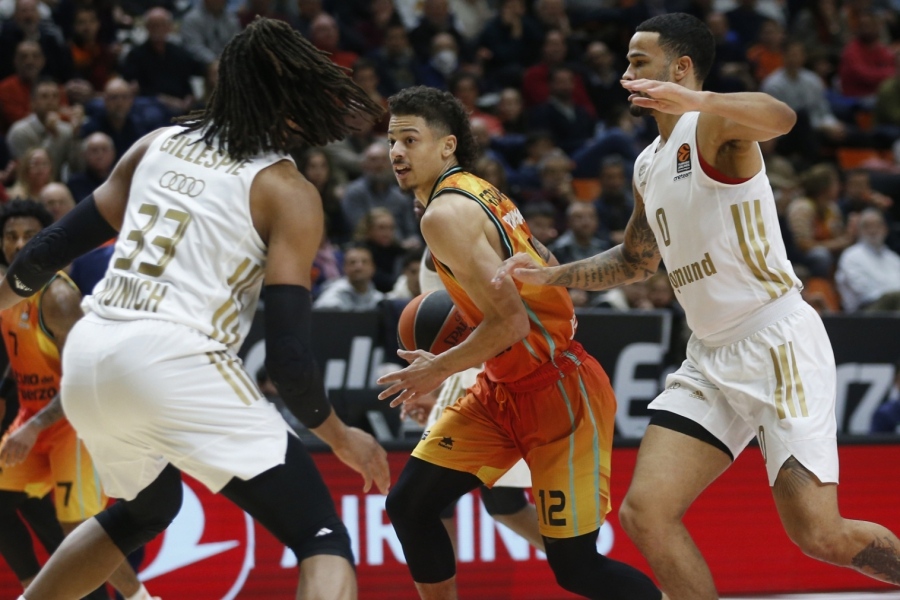 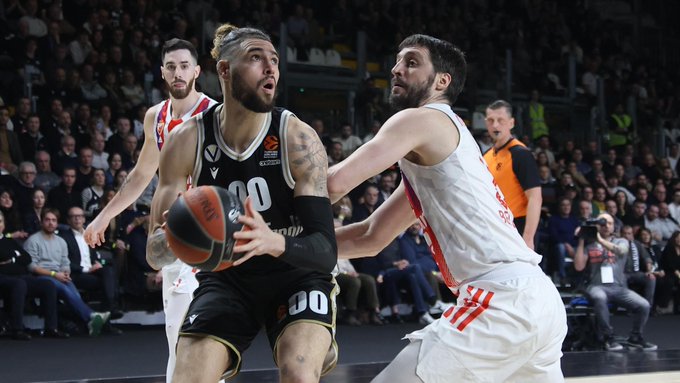